This is a growing assortment of articles, books and podcasts that we consider relevant for understanding the Belt and Road Initiative and other infrastructure projects driven by capital originating from China. You will also find here publications on experimental forms of territorial sovereignty, such as special economic zones and extraterritorial seaports, that arise alongside China’s global infrastructural and economic expansion.

Infrastructures of Faith: Religious Mobilities on the Belt and Road

Visit the website of this great research project based at the University of Hong Kong. The project is devoted to studying the religious impact of China’s BRI and the related intensification of infrastructural ties in Asia and beyond.

This initiative aims to take stock of the rapidly developing and widely varying changes that are occurring in the wake of China’s Belt and Road Initiative (BRI). It brings scholarly expertise to bear to understand these potentially massive transformations underway across Asia and Eurasia.

Visit the growing blog here: https://munkschool.utoronto.ca/beltandroad/blog/ to read a fantastic contribution by the ROADWORK collaborator Galen Murton “Geopolitical gravity and blanks on the BRI map” and earlier posts by, among others, Evelina Gambino, Stevan Harrell and Tim Oakes.

Что пандемия коронавируса говорит нам о евразийской центральности? // What does the corona virus pandemic tell us about the centrality of Eurasia?

Summary of the article by Zarina Urmanbetova

Via the popular Russian platform Central Asia Analytical Network, Ivan Zuenko, an expert on Eurasian integration, has shared his analysis of COVID-19’s spread from Wuhan to the rest of the world, and how it made its way to Central Asia in particular.

Zuenko starts his review by stating that COVID-19 has drawn a new map of the world, which reveals as never before the linkages of economic and human contacts between countries and regions. The coronavirus, which seemingly originated in the city of Wuhan, at the junction of several major transport arteries in China, has illustrated the reality of what is near and what is far in the modern world. According to this map, Zuenko writes, China appears in fact to be closer to Europe than to Central Asia or the Russian Far East. Economic and social contact between central China and its territorial periphery is limited. While the virus moved rapidly through central China and continued to spread to the likes of New York, Sydney and Bangkok, it almost bypassed the Xinjiang Uyghur Autonomous Region and the Tibet Autonomous Region in China’s west and northwest.

The intensity of China’s contacts with its Inner Asian neighbours is still  not comparable to its connections with North America, Europe and Australia – this in spite of all the rhetoric around the Belt and Road Initiative (BRI), which positions Xinjiang, for example, as a key node on the so-called New Silk Road.

COVID-19 mapping reveals low mobility across borders with Russia too. Despite the fact that the borders between China and Russia (amounting to about 4000km) were only closed on 31 January and a complete ban on Chinese citizens entering Russia was not introduced until 20 February, the first Russian infected with coronavirus was recorded on 2 March – a tourist recently returned from Italy. On 24 March, the first two cases of coronavirus in Vladivostok, capital of the Far Eastern Federal District, occurred among Russian holidaymakers who had returned, via Moscow, from Italy and Mexico. The situation in Central Asia was similar. The first case in Kazakhstan came from Germany, in Uzbekistan from France, in Kyrgyzstan from Saudi Arabia.

In the second part of the article, Zuenko reflects on the behaviour of different countries during the pandemic and on the success of measures introduced in the European Union, in the United States and across Asia. The coronavirus has removed the mask of political correctness, he writes, reflecting on incidents of xenophobia and racist attacks against Asian people abroad. In March, however, political and social attitudes towards COVID-19 and Asians transformed. This was for two reasons, Zuenko argues: first, the successful battle of East Asian countries with coronavirus and, second, reverse discrimination against Europeans in Asia.

Zuenko concludes his analysis by suggesting that the so-called globalized world hides an old and enduring skeleton: autonomous nation-states, conservative nationalist agendas, protectionism. The coronavirus pandemic has not only once again shown the peripheral position of the post-Soviet space in the world economy but also marks the “limits of what is acceptable” for society at the moment, slowing down further progressive movement towards integration in these regions for at least a decade.

China’s Belt and Road Initiative: Views from the Ground

A special issue published in Political Geography. The issue is edited by G. Oliveira, G. Murton, A. Rippa, T. Harlan and Y. Yang.

Excerpt from the yet unpublished synopsis:

“This special issue moves beyond policy-level analysis to study the BRI “from the ground,” both in terms of the articles’ methodological approaches and in their focus on specific projects. These case studies reveal the BRI to be dynamic and unstable, rhetorically appropriated for different purposes that sometimes gain credence as a coherent strategy.”

Exploring China’s borderlands in an era of BRI-induced change

This is a special issue edited by Agnieszka Joniak-Lüthi and Max Woodworth which was recently published in Eurasian Geography and Economics.

Excerpt from the abstract:
“China’s borderlands have received increased investment and policy attention since Beijing formally launched the Belt and Road Initiative in 2013. This special issue, comprised of four research articles and a photo essay, is designed to provide a timely intervention into the growing literature seeking to situate and assess this important policy campaign.

Drawing on extended ethnographic fieldwork in China’s southwestern, northwestern, and northern borderlands, the contributing authors analyze recent borderland transformations against the backdrop of the BRI. However, by shifting the analytical focus to prioritize voices and events in borderlands, the papers de-center Beijing-centric discourse on the BRI, and provide urgent reminders of region-specific geographies and histories.”

The Belt and Road Podcast

Check out the new episodes of this highly informative podcast by Erik Myxter-iino and Juliet Lu at: https://www.buzzsprout.com/196316

The China In Africa Podcast

“A weekly discussion about China’s engagement across Africa hosted by journalist Eric Olander in Hanoi and Asia-Africa scholar Cobus van Staden in Johannesburg.”

Check out this podcast if you are interested in learning more about China’s investment in Africa and about the newest developments in China-Africa relations.

A documentary on large-scale reclamation projects in Malacca directed by Monika Arnez from the University of Hamburg.

Excerpt from the synopsis:
“The documentary … is set, both against the backdrop of increasing Chinese investment in real estate in Malaysia in recent years … Futuristic, large-scale land reclamation projects are some of the visible expressions of these investments. Two case studies are explored in the film: ‘Forest City’ in Johor and ‘Melaka Gateway’ in Malacca, both of which have been launched in attractive places by the sea in these two Malaysian states. Moreover, both projects are part of China’s Belt and Road Initiative (BRI), and they are built on artificial islands reclaimed from the sea. Yet having been initially hailed for boosting the economy and creating jobs these projects have also subsequently attracted criticism for exacerbating social injustices and for impacting negatively on the environment.”

Excerpt from the abstract:
The “grounded studies” assembled in this themed issue “(1) complexify the actors involved in China’s global integration to focus on those who work in a variety of (un)intentional ways to attract, implement, sustain and resist specific initiatives that constitute China’s overseas activities; (2) revise fixed notions of core and periphery, especially with respect to the origins, flows and destinations of capital, power and goods emanating from China’s metropolises; (3) and rescale the state, capital and elite interests to identify the key scalar moments at which big policy ideas are transformed into new development geographies.

This introduction and the papers in the issue focus specifically on those actions and actors whose work is key to extending the natural resource hinterlands of China, China’s firms and specific subnational interests in partner states to the Americas, Africa and Eurasia under the policy banners of the ‘Go Out strategy’, the ‘Great Western Development Plan’ and the ‘Belt and Road Initiative’.”

The Specter of Global China: Politics, Labor, and Foreign Investment in Africa

An impressively well-researched study on China’s state-driven investment in Africa by Ching Kwan Lee (2017, The University of Chicago Press). 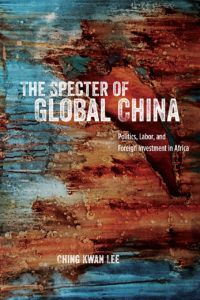