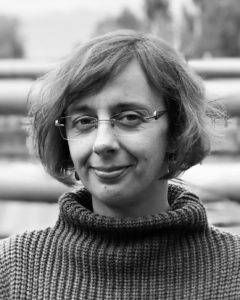 Agnieszka’s regional expertise centers on the People’s Republic of China and the Sino–Central Asian borderlands. She has spent more than four years studying and conducting research in China, first in the lush southwest, then in the megalopolises of Beijing and Shanghai, and since 2011 in the arid northwest. Her recent research explores the nexus of transport infrastructure, settler colonialism and processes of state territorialization there.

For ROADWORK, Agnieszka will continue her research in northwest China but also plans to expand her field into neighbouring regions of Kazakhstan and Kyrgyzstan. She will focus on the challenges of infrastructure maintenance in the fluid landscape of the Sino–Central Asian borderlands, and on how temporalities of materials, investment, discourses, government agendas, ecosystems and humans affect the social life of infrastructures in this part of Asia. 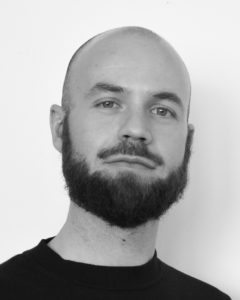 His PhD thesis draws on 18 months of fieldwork among Mongol pastoralists and their animals in the west of the Inner Mongolia Autonomous Region, northern China. The thesis explores the significance of the domestic Bactrian camel in the political ecology of this region, where traditions of extensive animal husbandry are threatened by policies designed to tackle desertification. His PhD research brings the study of human-animal relations, and the materiality of politics, into conversation with the political ecology of China’s borderlands.

Thomas is a Lecturer in Social Anthropology at the University of Cambridge and a Postdoctoral Researcher on the ROADWORK team. He will focus on the Inner Mongolian section of the Beijing–Urumchi highway, claimed to be the ‘northern’ Silk Road. This road is particularly useful for studying the ways in which highways affect the lives of rural inhabitants of Central Asia, especially pastoralists. He is interested in the ways in which the road acts as an interface of multiple mobilities, of livestock, sand, and humans, acting as a conduit for some and a barrier for others. His new research thus develops his longstanding interest in political ecology, while also drawing inspiration from recent work in the anthropology of infrastructure.

Zarina is a social anthropologist from Kyrgyzstan. She received her BA from the Kyrgyz-Turkish Manas University in Bishkek and her MA in Social Anthropology from Hacettepe University in Turkey. After completing her studies, Zarina returned to Kyrgyzstan where she has worked since as a researcher on various projects conducted by such organizations as UN Women Kyrgyzstan, the foundation Urban Initiatives, Research Institute of Islamic Studies in Bishkek, and Analytical Center Polis Asia. She has always been interested in religious practices, identity, ethnicity, feminism/gender and urban studies.

Zarina is the PhD student in the ROADWORK team. She will focus on the social life of roads in the Sino–Kyrgyz borderlands where she is going to conduct twelve months of ethnographic fieldwork in 2019-2020. 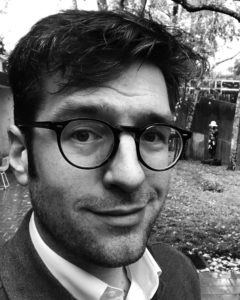 Eric is Assistant Professor of Chinese History and Politics at the University of Montana and a Mellon Fellow at the Institute for Advanced Study. His research concerns the sociocultural history of China and Inner Asia, with a focus on the Qing through Republican periods in Xinjiang. Eric is the author of several articles on Chinese Central Asia past and present and a new textbook for learning the Chaghatay language. He received his PhD in History and East Asian Languages from Harvard University and an MA in Central Eurasian Studies from Indiana University.

For ROADWORK, Eric will explore the changing infrastructure in Xinjiang in the late Qing period, specifically the ways in which merchant houses who followed the Xiang Army into Xinjiang in 1877 influenced the patterns of movement for people, goods and information in the region. Eric and Agnieszka will conduct joint archival research in China in 2020. 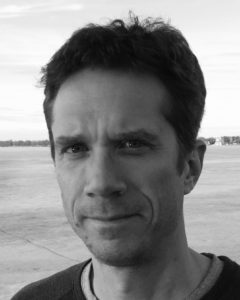 Judd is an Associate Professor of Modern Chinese History at the University of Wisconsin-Madison. His work focuses on the ways that natural resources define and often limit state power in Chinese border regions. His book, Natural Resources and the New Frontier: Constructing Modern China’s Borderlands, which was published by the University of Chicago Press in spring 2018, offers a new material-centered perspective on the development of institutions of state power and authority and the parallel growth in ethnic tensions in China’s far western province of Xinjiang. Using Xinjiang as a case study, this work reveals a new way of thinking about many of China’s border regions. In addition to the book, Judd has published widely on various topics including Han gold prospectors in Xinjiang, steel production in wartime Southwest China, and Soviet geologists in northwest China.

For ROADWORK, Judd will focus on the politics and practicalities of infrastructure building and maintenance in Nationalist-era Xinjiang, and how these influenced the patterns of infrastructure development in the Communist period. During their joint archival research in 2020, Judd and Agnieszka will attempt to learn more about the environmental conditions of earlier travels through northwest China and the ways in which humans engaged with the environment to establish and maintain connectivity in this region in the first half of the twentieth century. 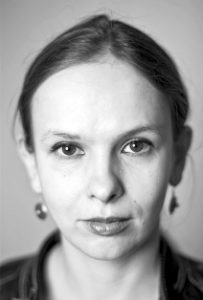 Emilia is a Postdoctoral Researcher on the ROADWORK team. 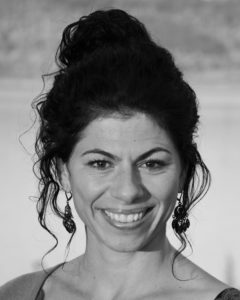 Verena studied Cultural Anthropology, Modern Sinology and Modern Indology at Ruprecht-Karls-University in Heidelberg, Germany. During her studies, she spent three semesters abroad at Leiden University in the Netherlands, and at Shanghai International Studies University and Yunnan University in the People’s Republic of China. In her current doctoral project at the Max Planck Institute for Social Anthropology in Halle, Germany, Verena focuses on trade, infrastructure, social networks, kin relationships and social change in southeastern Kazakhstan. For her dissertation, she has conducted twelve months of ethnographic fieldwork in the region neighbouring Khorgas, the main border crossing between China and Kazakhstan.

Verena will join ROADWORK in early 2020 after completing her dissertation and will focus on the emerging social, spatial and economic hierarchies generated by infrastructure investment in southeastern Kazakhstan, where one of the key routes in the Silk Road Economic Belt is located. 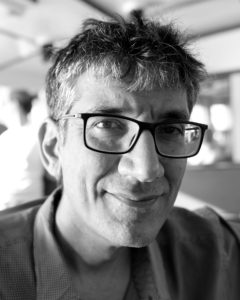 Hasan H. Karrar is an Associate Professor in the Department of Humanities and Social Sciences at Lahore University of Management Sciences (LUMS), specializing in modern Chinese and Central Asian history and political economy. He works on economic and political configurations in the greater Central Asian region (inclusive of western China and northern Pakistan) since the 1980s. These include informal markets and bazaar networks; economic corridors and ongoing iterations of the Silk Road trope; border regimes and emerging spatial configurations. Within this broad geographical and thematic terrain, Hasan’s research is presently focused on two areas: bazaar trade in Central Asia since the 1980s and evolving border regimes along the Karakoram–Pamir watershed over the last century. Hasan’s recent work has appeared in China Information, Globalizations, Central Asian Survey, Critical Asian Studies and with co-authors in Political Geography, Capitalism, Nature, Socialism and Critical Public Health. His earlier research on the development of Sino–Central Asian relations appeared as The New Silk Road Diplomacy: China’s Central Asian Foreign Policy Since the Cold War (Vancouver: University of British Columbia Press, 2009).

For the ROADWORK team, Hasan will share his knowledge on the China–Pakistan Economic Corridor and the various ways in which China’s infrastructure investment in northern Pakistan is transforming the economic and political landscape of the region. 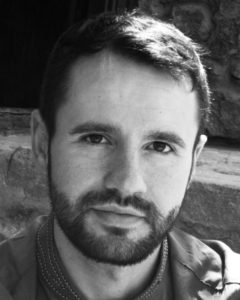 Till Mostowlansky is an anthropologist of humanitarianism, infrastructure, development and Islam in contemporary Central Asia and at its historical crossroads between Russian, British and Chinese influence.

Till is the author of two monographs and many journal articles. His 2007 book Islam und Kirgisen on Tour: Die Rezeption “nomadischer Religion” und ihre Wirkung [Islam and Kyrgyz on Tour: The Perception of “Nomadic Religion” and its Effects, Harrassowitz] focuses on Islam and nomadic identity in Kyrgyzstan. In 2017, he published his second book Azan on the Moon: Entangling Modernity along Tajikistan’s Pamir Highway (University of Pittsburgh Press), which is situated in the anthropological study of routes, roads and pathways, and the anthropology of infrastructure more generally. His articles have appeared in, among others, Central Asian Survey, Modern Asian Studies, Political Geography and The Muslim World.

In his current book project on Muslim humanitarianism, Till works on the transformative force of Muslim networks that dissect the borderlands of Afghanistan, China, Pakistan and Tajikistan and mediate connectivity to places across Asia. In the context of this project, he is also researching the significance of Chinese-built infrastructure for these networks, and edits the series MUHUM – Muslim Humanitarianism at Allegra Lab.

In ROADWORK, Till will share with the team his knowledge on China’s infrastructural engagements in Tajikistan and how this newest wave of construction inscribes itself onto an existing landscape of material and figural infrastructures brought about by multiple modernization projects in the region initiated by the Soviet Union, transnational Muslim networks and the young Tajik state. 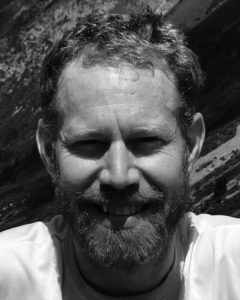 Galen Murton is Assistant Professor of Geographic Science in the School of Integrated Sciences at James Madison University in Harrisonburg, Virginia (USA). He is also a Marie S. Curie fellow in the Department of Social and Cultural Anthropology at LMU Munich (Germany) where he is working on the project ‘Road Diplomacy: International Infrastructure and Ethnography of Geopolitics in 21st Century Asia’. Galen is particularly curious about the ways in which power operates spatially through material things like roads, rails, fences, and dams and primarily studies the processes and effects of these kinds of development dynamics in mountainous border regions of Highland Asia. Galen’s current book project, Infrastructural Power, examines how Nepal receives and leverages international infrastructure investment in order to expand state presence, and how this aid invariably comes with certain strings attached. His research has been published in outlets including The Annals of the American Association of Geographers, Eurasian Geography and Economics, The Journal of South Asia, HIMALAYA: The Journal of the Association for Nepal and Himalayan Studies; Cross-Currents and The Denver Post. In addition to teaching courses on cultural geography, development studies, and the history of geography, he also enjoys conducting fieldwork with his students in the mountain ranges of Asia as well as the Americas.

As part of the ROADWORK team, Galen will contribute his understanding of the ways in which China operates and is perceived as a central actor in processes of international road and associated infrastructural development in Nepal, Bhutan, and India. Particularly in the context of Beijing’s Belt and Road Initiative and in view of long-standing geopolitical tension between China and India, the ‘rise of China’ in South Asia merits close attention for better understanding the implications of the so-called ‘China model of development’ as well as shifting paradigms of South-South international aid and other geopolitical and geoeconomic relationships. 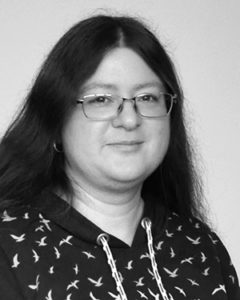 Miriam is the administrative manager of the ROADWORK project. Contact her directly at miriam.wohlgemuth@uzh.ch if you have any questions concerning the reimbursement procedure.