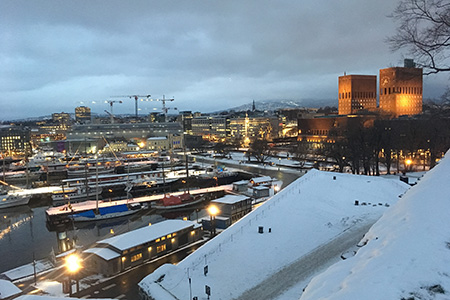 In Western media China increasingly comes across as an ever more authoritarian state. At the same time, the country is taking the responsibility to help address climate change and global poverty. We hear that China is a global economic miracle, as well as a potential threat to democracy. In this publicly open seminar, some of the world’s foremost experts on Chinese society, politics and environment discuss what China looks like behind the media images.

Organized in three panels, scholars will debate short- and long-term developments in the political system, which global ambitions the Communist Party is cultivating, the human rights situation in Xinjiang, feminist activism, and how the government and the public are responding to environmental degradation and climate change.

The seminar is organized by the research project “Airborne”at the University of Oslo (UiO).

Infrastructures such as roads, buildings, railways, heating systems or power lines are complex social-material-technological formations. Anthropological research into the meanings and workings of the built environment has demonstrated that materials, technologies and built structures are inherently social and dynamic. Moreover, though knowledge is often framed as something invisible—existing in discourses, ideas and cognition—the anthropology of infrastructure makes clear that it also is manifested in and thus has to be studied through materials such as concrete, steel, tarmac or sand and their use in the construction process. This is evident in anthropological studies that engage with the role of infrastructure as a built and building part of society. For example, houses can embody remittances entangled in migration histories or serve as real estate investment. Mobile phone-enabled connectivity expands networks of social relations. Mining of materials for infrastructure construction is embedded in the complex political ecology that stretches far beyond the actual construction site. Roads are platforms for projecting political agendas, expectations, fears, and claims to power. Ethnographic research on infrastructure meaningfully contributes to infrastructure studies by exploring infrastructure’s mundane social life and highlighting its inherent dynamism. Social anthropology thus balances out the focus on engineering, technological advancement and construction manifest in glossy images from opening ceremonies by contributing knowledge on the social life of infrastructure, the often neglected impact of time, the processes of social-material decay, and the complex work of maintenance.

Hence, anthropological knowledge contributes to understanding infrastructure beyond its normative function and rather as dynamically-evolvingsocial relations between materials, humans, discourses, knowledge, environment, the state, capital and more, relations that stretch across place and time.Social anthropologists have demonstrated an explicit interest in combining different scales of knowledge in their research, e.g. the scale of political decision-making, the scale of engineering knowledge, the knowledge of technologies and materials, the knowledge of the mundane lives of the workers, and the knowledge of power relations which manifest in infrastructure, among others. Anthropological research on infrastructure has thus also substantially, though often implicitly, contributed to destabilizing the notion of an anthropological ‘site’ or ‘field’, and has also sought to reflect it in its methodology.

Matthäus Rest, Max Planck Institut für Menschheitsgeschichte, Jena
Do it for the culture. The infrastructures of milk preservation 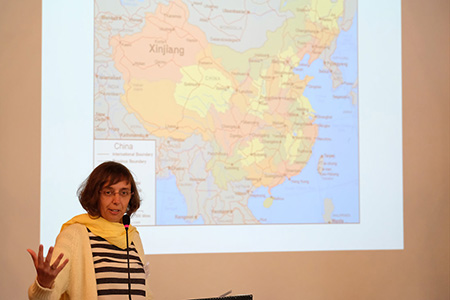 Infrastructures of change
Since 2000, when China launched its Open up the West campaign, and at an even greater pace since 2013 when the One Belt One Road initiative (OBOR) was initiated, the Xinjiang Uyghur Autonomous Region in northwest China has been subjected to rapid social-material transformations. Huge amounts of funding have since been invested in road and railway construction. This significantly changed the spatial organization of the region and had all sorts of social, cultural, and economic effects which further complicated the already tense political situation in the region. While the focus of Chinese and international media is on the spectacular opening ceremonies of new roads, in my talk I instead explore what happens after the construction teams pack up, ceremonies end and the newly built infrastructures begin their complex social existence. I propose to theorize roads as complex social-material structures which concurrently exist on a number of spatial and temporal scales. In Xinjiang, the new roads inscribe themselves onto a highly charged political terrain and overstrained ecosystems. This complicates their social effects and deserves a nuanced analysis to understand their ambiguous ramifications.

In the highlands of Asia, construction of roads, railways and airports in previously inaccessible and peripheral territories represent a major element of nation building. The Pamir Highway, for instance, was fundamental to Soviet governance in Central Asia. A similar argument can be made for the roads and railway connecting eastern China and the Tibet Autonomous Region. In Kashmir, roads and airports were for the most part the results of strategic considerations, and the role of the army in their construction, use and maintenance remains crucial. Today the strategic motivations for infrastructure construction are increasingly downplayed by the discourse of transnational connectivity in trade and development which transportation infrastructures, reportedly, automatically generate. Often brought under the umbrella of so-called “economic corridors” such massive infrastructures are, we are told by the proponents of such projects, means for commercial and cultural exchanges, not devices of securitisation.

On the ground, such promises meet a harsh reality, in which infrastructures are conspicuous for their fragility and on-going disintegration. We argue that this intrinsic fragility of infrastructures, as well as the central role of maintenance should be more explicitly addressed, both empirically and conceptually. In this panel, we discuss the implications of such fragility in border regions, where infrastructures have for decades served as the main means of nation-building for border communities.

Conceptually, we contend that infrastructures should be analysed from within their social, material and political environments and entanglements. Construction is from the beginning accompanied by a parallel process of ruination, and maintenance often becomes the main way of engagement for the lowland state. Infrastructural fragility, it could be argued, both reflects the contentiousness of any nation-making process, while also providing the state with an opportunity to secure its presence across contested borderland spaces. A challenge, as well as an opportunity.

Papers in this panel explored this contentious nexus, and discussed the following themes:
– the ontological fragility of infrastructures and how it affects the maintenance of state materiality in the highlands of Asia;
– ethnography-based case studies of the politics of maintenance;
– what happens when different layers of ruins, often the result of different state interventions, co-exist in a particular space;
– how promises of peace, modernity and wealth are inscribed onto infrastructures and navigated vis-à-vis mundane experiences of disruption and decay.

Till Mostowlansky, Graduate Institute of International and Development Studies, Geneva
The Longest Construction: Building and Shattering the Borderlands of the Pamir-Karakoram

Mia Bennett, The University of Hong Kong
Between Permafrost and a Hard Place: Loss and Livelihoods Amidst Post-Soviet Infrastructural Decline

Mustafa Khan, SOAS, University of London
China Coal Roads in Pakistan and the Contradictions of Modernity

After a series of fantastic conference panels during the day (“Borderland Commodities: In and out of the Legal Shadows”; “Liquid Undercurrents: Infrastructure and the Border Lives of Fuel, Water, and Cash”; “Resurgent Frontiers: Mobility, Regulation and Infrastructure in South Asian Borderlands”; “Hyperbuilding Highland Asia: Ethnographic Engagements with Emerging Infrastructural (Geo)Politics”; “Cross-Border Social Interactions and Tensions in Central Asia”; “Ocean Grabbing and Ocean Re-claiming in Asian Maritime Borderlands” and “Local Responses to Infrastructural Degradation”)our colleagues from anthropology and geography departments across Europe, the US and Asia convened in the evening at the house of our Kyrgyz host Bakytbek for a seriousnetworking event.

Dear Bakytbek and family, we are very grateful for your hospitality, thank you so much for facilitating our gathering.

Research Trip to Kazakhstan and Kyrgyzstan

The research trip to Kazakhstan and Kyrgyzstan in August marked the official beginning of the ROADWORK project. The aim of this three-week road-trip was to get in touch with potential research partners and to visit the field-sites in southeast Kazakhstan and southern Kyrgyzstan where Zarina and Verena will conduct their research in the coming years.